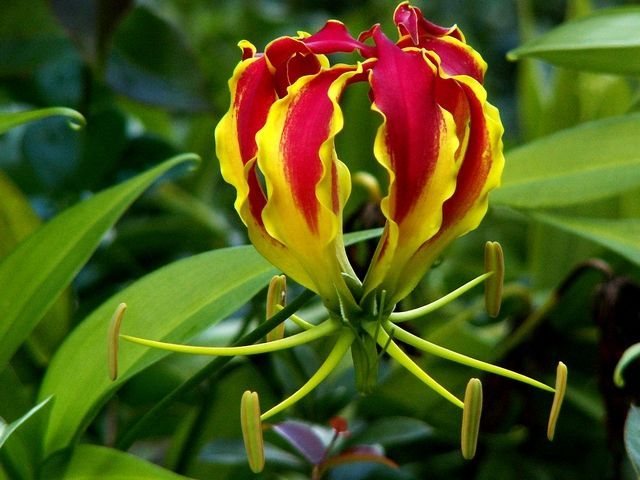 Flame lily is a climber with spectacular red and yellow flowers, but all parts of the plant (especially the tubers) are extremely poisonous and can be fatal if eaten. Flame lily is a tuberous herb, which is widespread in tropical and southern Africa and in tropical Asia. The generic name Gloriosa means 'full of glory' and the specific epithet superba means 'superb', alluding to the striking red and yellow flowers. All parts of the plant, but especially the tubers (swollen, underground stems), are extremely poisonous and the ingestion of flame lily has caused many accidental deaths. It has also been used to commit murder, suicide, to induce abortions and to poison dogs. African porcupines and some moles are reputed to be able to consume the roots with no ill effects.

In Ayurveda and Yunani systems of medicine it is a reputed medicine. According to Ayurveda, tuber is pungent, bitter, acrid, heating, anthemirtic, laxative, alexiteric, abortifacient, and useful in ulcers, leprosy, piles, iflommations, abdominal pains, itching and thirst. Gloriosa Superba Seed contains natural chemicals, colchicin & colchicoside that are being considered for their use in anti-cancer drugs. A paste of the root formed with water is used as an anodyne application in bites of poisonous insects, snake-bites, scorpion-sting, parasitic skin diseases and leprosy. Root is useful when given in gonorrhoea, leprosy, piles, colic and to expel intestinal worms. Rubbed with Chitraka bark in cow's urine it is applied to painful piles