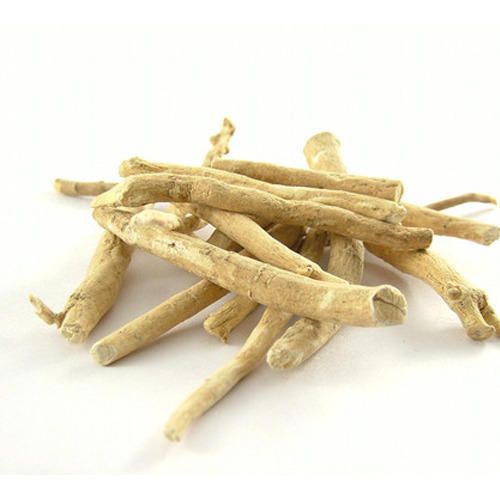 Ashwagandha (Withania somnifera) is an herb used in Ayurveda, the traditional medicine of India. Its root has a horsey smell and is said to confer the strength and virility of a horse. Various parts of the plant are used, but the most common in supplements is an extract of its roots.

Uses :
It is Tonic, Abortifacient, Astringent, Deobstruent, Nervine, Aphrodisiac, and Sedative. It is official Indian Pharmacopeia. It is popularly known as Indian Ginseng. It gives vitality and vigor and helps in building greater endurance. It has been used in diseases such as rheumatism, leprosy, and arthritis. All parts of the plant are used in herbal medicine. In Ayurveda, the fresh roots are sometimes boiled in milk, before drying, in order to leach out undesirable constituents. The berries are used as a substitute for rennet, to coagulate milk in cheese making. Ashwagandha in Sanskrit means "horse's smell" probably originating from the odor of its root which resembles that of sweaty horse. The species name somnifera means " sleep- bearing" in Latin, indicating it was considered a sedative, but it has been also used for sexual vitality and as an adaptogen. Some herbalists refer to Ashwagandha as Indian ginseng, since it is used in ayurvedic medicine in a way similar to that ginseng is used in traditional Chinese medicine. The product called " Ashwagandha oil" is a combination of Ashwagandha with almond oil and rose water designed to be used as a facial toner, therefore should not be consumed.
Read More...